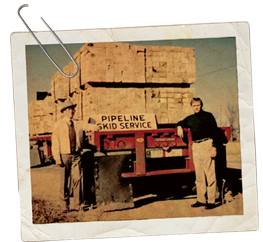 Pipeline Skid Service is a family owned business founded in 1953 and the principal of providing timely and quality products to our customers.  Our company was formed in a small town in south east Kansas when Gail Malson saw a need for a pipeline skid distributor in the Midwest.  Starting with a few small sawmills located mainly in Missouri and Arkansas, Gail grew the company to numerous sawmills across the country in order to provide affordable and quick supply of pipeline skids to his customers nation wide.  Since then we have grown to supply several hardwood products including crane mats, laminated mats, and other hardwood products.

Our company is now operated by Gail’s son Bob Malson who joined the company in 1977.  Bob moved the company to central Texas near San Antonio in the late 90’s but still uses many of the same sawmills that we started with in 1953.

In 2014, Bob’s son Clay Malson joined him at the company to become the third generation of father son to work and run the company.

About Us was last modified: June 14th, 2016 by Pipeline Skid Services